Featuring ‘Blair Witch’ – Solve an immersive mystery told over the course of six “episodes” or boxes.

A terrifying experience delivered to your door!

Embark on a horrific journey that unfolds over the course of six episodes. Every month, you’ll receive a new episode full of clues that unlock a portion of your case and introduce a new set of challenges. At the end of your six-episode story, you’ll automatically be sent the next storyline for as long as your membership is active.

Your first case – Blair Witch Season 1: Rosemary Kent needs your help to find her son Liam. Liam disappeared months ago and the police aren’t doing much to help. Get lost in the woods to uncover the truth about recent disappearances and the supernatural forces behind them.

After you finish Blair Witch Season 1, you’ll automatically be sent your next case: Blair Witch Season 2. After a team of podcasters vanishes during a seemingly routine trip into the woods, you must help Ed Barrett solve the mystery of what happened to them.

Use your detective skills to decode ciphers, solve cryptic puzzles, and uncover the history of Burkittsville.

Transforming an ordinary game night into a terrifying investigation.

A new episode will be shipped to you every month until you complete 6 episodes to solve the mystery and uncover the truth.

Subscription renewals take place on the 1st, every three months.

Most orders ship the next business day after your order is placed. Orders for delivery in the United States ship via UPS with final delivery by USPS. Typical transit times are 5-7 days. Marshmallow of the Month Club

A subscription box for marshmallow lovers who love gourmet marshmallows!

It’s a taste experience, every single month! With the Marshmallow of the Month Club, you’re treating yourself to an edible excursion you can feel good about. All marshmallows are made with all-natural, no-guilt ingredients that infuse flavour and fun into every bite.

Let’s get ready for s’more season with your all in one s’mores kit. Newstalgia.

NO ARTIFICIAL FLAVOURING | Every batch is made with whole, fresh ingredients

IMPROVED PACKAGING | Packaging is changing to a 4×4 gift box stuffed with the same fresh-baked goodness. Your first box comes in our signature smore box.

THE PERFECT HOLIDAY GIFT FOR MARSHMALLOW LOVERS! Its a taste experience, every single month! With the Marshmallow of the Month Club, treat yourself to an edible excursion you can feel good about. All marshmallows are made with all-natural, no-guilt ingredients that infuse flavour and fun into every bite.

MADE WITH CARE | Marshmallows are made using fish-based gelatin (perfect for pescatarians); egg-free; gluten-free option available.

Only ships within United States Skulls Unlimited is the World’s Leading Supplier of Osteological Specimens.

Each of the #BoneBox subscriptions include a mystery skull, collectible animal trading cards, a unique animal or art item and of course related promotions and exclusive discounts!

Each specimen at Skulls Unlimited International Inc. is carefully prepared with the use of dermestid beetles then degreased and whitened using a chemical process. This process is an essential step that will ensure an attractive and sanitary display or teaching piece. The specimens you can expect in your BoneBox will be “A” or “B” quality and may exhibit minor imperfections.

The value of the BoneBox will vary month to month but will always exceed the cost of your subscription.

Items in the BoneBox will always be natural bone animal products, never replica. Items included in the past have been skulls, teeth, bacula, claws, and other osteological items.

Due to Wildlife export restrictions the BoneBox is only available to the lower 48 States, Alaska, and Hawaii.

*This Excludes all US Territories Paranormal t-shirts with hidden elements that could lead you to some FREE Merchandise! Come Play!!!

ParaBox is a t-shirt subscription box, with a twist! Each month you will receive a new paranormal soft style tee & info card about that month’s theme.

The shirt & card will contain clues to finding a hidden password for use on their website. On their site you will find clues to next months theme. Correct entries are in a raffle for free merchandise!

If your order is received during the first week of the month, it will ship with the current batch.

If it is received after that shipment has gone out, your subscription will start the following month. My Thrill Club delivers the best in crime, mystery, thriller, espionage, and horror. You tell them your favourite genre and they will ship two new hardcovers right to your door. They also include surprises from time to time. New orders ship within 3 business days.

The value of your box is always more than you pay!

Ships within Three Business Days. Subsequent boxes for following months will ship on the 1st of each month. They can also accommodate birthdays and special occasions.

Only ships within United States

Which is the best Halloween subscription box to buy?

The choice is truly yours! With the wide selection of Halloween box subscriptions, there is something for everyone. View all available Halloween subscription boxes.

Yes, many of the available Spooky Halloween monthly box subscriptions are available year round. You can select the delivery regularity of your box delivers with each individual seller. 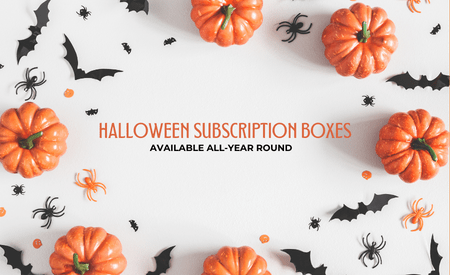